We Don't know "When" it is our Time to go home.

So often we take our lives for granted. Life is fragile, and we don't know when the Lord is going to call us home. The parable of the wedding feast in Luke 12 ,as well as many others, reminds us that we need to live each day to the fullest, ready for God to come back at any time.

I found out yesterday that a young man here in Winnipeg was killed over the weekend in the Osbourne area. I only knew Joshua Bentley briefly. I met him first at an outreach concert that our church had put on. He was at the event and we talked, and he came to our church a short time later. I liked him, as he was a real person doing his best to follow God in a hard world.

One of the services Josh attended was baptism Sunday, and we had completed our baptism section of the morning. I had left the tank and was going down the back hall ,when he was on his way to the bathroom. We looked at each other and he said..."I need to be baptized!" We talked to make sure he knew what that meant (that he wanted to live for God, excepted the sacrifice of Jesus, and was going to try to live for Him as best as he could) so back in the tank I went (after his washroom break) with Josh. Josh knows the Lord and his heart was God's that day!

I was honoured to baptize Joshua Bentley at Bethel Community Church. May God be with his family as they mourn the loss of a great young man. Rest in peace Josh
Those of us left ….
Live for God with all your heart, soul ,and strength. Tell everyone about Him….He is coming soon. 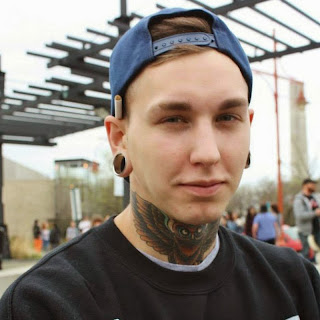 Posted by Canadian LifeLight Ministries Inc at 5:09 PM No comments:

I went to wash my car, as I had a few minutes to spare between appointments and it was finally warm enough to not freeze my car into an ice cube. I finished washing and even had enough time to clean the inside of the car out of all the little pieces of paper that had fallen. It was warm and I took my jacket off to wash and clean the car.
I had opened and closed the car door many times during this process, but the last time the door made a strange sound. The automatic door locks kicked in, and the keys where inside. After checking all doors, I went inside and asked for assistance. I did not have time for this setback, and hoped I would make my next meeting. Being next to a garage, they went and found a man who could open doors.
Turns out it still took him 30 minutes with his fancy tools, and when it was finally open I asked him what was owed. $30, a steal. As I got the money out of the interac machine, a friend of his came in and they  began to joke back and forth about the weekend to come, and my new friend said with a laugh that he had just earned this weekends beer money. As I handed him his earnings, I told him I had one more thing for him in the  trunk.
I opened it and asked him if he needed a Bible. After the conversation I heard inside, I thought the answer would be a quick NO, but he responded to me with an enthusiastic YES!
He picked one out and was far happier with his new Bible than with his money, and it reminded me that God is at work even when things seem to be going wrong.
Blessings,
Paul Winter
National Team Leader
Canadian LifeLight Ministries
Sent from my iPhone
Posted by Canadian LifeLight Ministries Inc at 9:35 PM No comments:

What a great way to spread the good news!
Could you be the next Bible Santa in Winnipeg? Hope so! 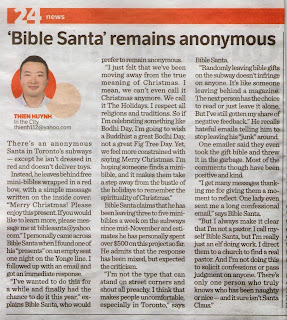 Posted by Canadian LifeLight Ministries Inc at 11:14 AM No comments: