As I write these lines I do not know what the outcome is. Up until this point, three days before Christmas I have been disobedient to the nudging of the Holy Spirit to give a former work colleague a Bible. Ask me why, and I have no answer. Who knows why the heart attuned to God, seeks its own way? 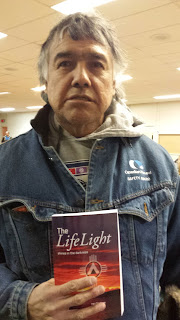 Before coming to Lifelight Ministries I worked for a period of months with man I will call “Larry.” Larry has no relatives in Canada, works at a job that has few if any prospects for advancement, for pay that is just above the minimum and keeps him in the clutches of poverty.
His best friend is a trusted and loyal canine acquaintance. Larry was my shipper, and I was the person sent out on deliveries. When I first went to work under him he wasn’t sure what to do with me because when I made a mistake, I admitted to them. He reprimanded me.
Then, whenever there was a problem or mistake he would come to me first: And I admitted to things I did (like storing a brake pad on end warping it) but then I also refused to take responsibility for things I didn’t do. In short, I was honest.
Larry wasn’t sure what to do with that. Me being honest about my work shortcomings, and not lying was not a unique experience for him, but it was unusual. After a time of adjustment, Larry figured out that I would take responsibility for my shortcomings at work, but would also ask how I could improve. And he advised me, so that little by little we won each other’s trust.
After a time, when Larry had pita (pain in the a**) customer, I got the opportunity to ‘smooth things over.’ After a time, whenever there was a pita customer, guess who had the privilege of bringing the right car part, or making the right change, or rectifying whatever was wrong. Yours truly. Once, when a customer had overheard staff talking about him over the phone when the phone was not put on hold properly, I was the one sent to make amends. I was the only one had had not joined in the profanity laced assessment of this customer.
Time passed and I moved on to lead Canadian Lifelight Ministries. Larry called upon me several times shortly after I took my new role, mostly because he knew that if he asked me to work on a long weekend and I said yes, I would be true to my word and show up for work.
This fall I went in to the store where we had worked to buy a cargo net, met Larry and I felt the nudge to pass a Scripture to him. And I resisted. I the national team leader of a Bible distribution ministry… and I am making excuses for not giving out a Scripture to someone who I do not believe has ever read the Bible. What!?
This past week I had lunch with a pastor friend of mine. I disclosed to him my sin, and asked him to be accountable with me to follow up. “I need to do this, I know it, and I don’t know why I keep hesitating?” As I told him this story of how I felt called to give a Scripture I wondered if putting a Tim Horton’s gift card in the Bible and offering to listen to his questions should he want to talk might be a ‘good way’ of offering a doorway to conversation.
My friend, listened carefully and I sensed a rising excitement in him. Why? He told me a member of his church was giving him gift cards to give out. Would I allow him to give me a gift card to include with the Bible? This day, at noon, he called. “I have the gift cards. Let’s do this!” We both sense that God is up to something… and we don’t know what.
Someone we both sense, He and I that this urging of the Holy spirit, and my delay is about something we don’t know the ending of. My confession to him has been, “I just know I need to be faithful… and somehow trust that what God is weaving is more than what I can comprehend.”
And in talking about this work experience, I spoke about an ethnic Armenian auto mechanic, and my pastor friend shared how he had buried the grandfather of one the students he coaches in football. At the service an Armenian man who worked as a realtor gave him some money and said, “do something good with this.”
I don’t often think of Advent as a time of waiting in sin. My confession to you is that I felt urged to give Larry a Bible, I have resisted. Today I am going to pick up a gift card from my friend, and will gift wrap a Scripture to be given tomorrow.
I do not know the outcome, I just know I don’t want this Christmas to come, and still be procrastinating about that which the Holy Spirit has been prompting me. And together with you, I want to live into the wonder that God may bestow in ways we do not yet know, the wonder of God’s presence among us.